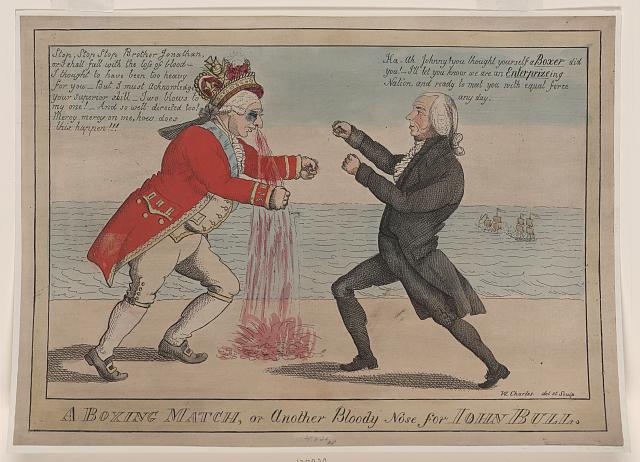 Summary: The artist gloats over naval losses suffered by England early in the War of 1812, in particular the defeat of the warship "Boxer" by the American frigate "Enterprise" in September 1813. King George III stands at left, his nose bleeding and eye blackened, saying, "Stop...Brother Jonathan, or I shall fall with the loss of blood -- I thought to have been too heavy for you -- But I must acknowledge your superior skill -- Two blows to my one! -- And so well directed too! Mercy, mercy on me, how does this happen!!!" On the right, his opponent James Madison says, "Ha-Ah Johnny! you thought yourself a "Boxer" did you! -- I'll let you know we are an "Enterprize"ing Nation. and ready to meet you with equal force any day." In the background, on the ocean, two ships are engaged in battle.